Flags of the world: Canada

Flags of the world: Canada

Flags of the world are often taught to our children in middle primary school. They learn briefly about the history of the country and what the flag and its colours represent. Learn a little bit about Canada and its flag with this colouring printable flag for kids.

Description: The Canadian flag has two red bands on either side of a white band. The white band has a red maple leaf which is the countries national tree. These are of equal sides. Centrally, there is a white band with a red maple leaf. The red represents Canada as a former colony of England (red reflects the colour of Saint George's Cross) while white reflects its historical connection to France (white appears in the French royal emblem). 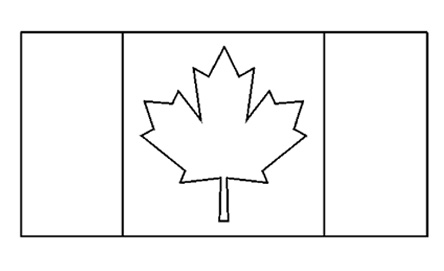 Print your own Canadian flag to colour in. See the colours you need to use below.

Please note: The black outline on the printable is to represent the outline of the flag. The Canadian flag is red and white only.