Many times in maths we come across things that we don't always understand. Lines and their meanings can be tricky. This is why we have put together a printable guide to show the differences between a ray, a line and other such maths terms for kids.

When most people think of a line, their mind wanders back to the bank, cinema or supermarket where they grew forever impatient and frustrated. Well, geometrical lines are similar in the way that they go on for infinity, but differ in what they are used for or can form. Confused? Here is a guide to show you exactly what we mean. 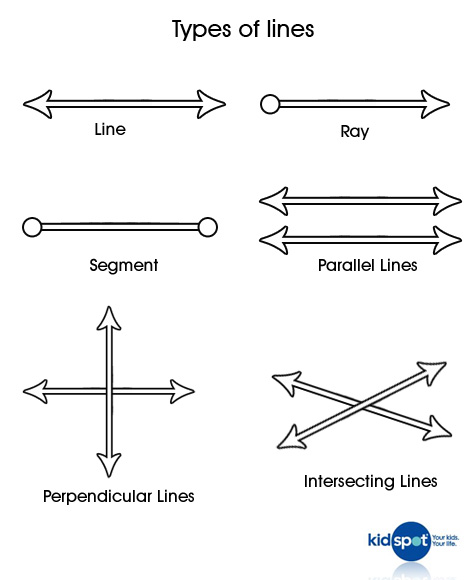 In geometry, a line not only goes off in both directions, a line actually has no width. A line should be drawn with an arrow at either end to show that it has no end and continues on forever.

Unlike the line, a ray has a starting point but no end. A ray should be drawn with an arrow at one end to show its continuation to infinity. The illustrated use of a ray would indicate a line of sight or light. The starting point of a ray line is in fact called the end point and although it may pass though one or several objects, it has no finish. This is why it should be illustrated with the arrow at one end.

A segment is used to distinguish point to point of a shape in geometry. The segment reaches one point to the next without extending past those points. Without the second point, this line would revert to a ray. See our shapes slideshow to visually demonstrate the segments of shapes.

To qualify as parallel lines, two lines must be the same width for the entire length of the lines. These lines may go from one point to the next (segments), they may be ray lines or regular geometrical lines but regardless of what type of lines they are, the must never meet.

Intersecting lines, as the name suggests, means two lines at some point will cross. These lines however do not necessarily have to cross visually on paper. If two lines are drawn angled towards each other and following the principal that these lines have no end and continue to infinity, they will at some point intersect. The only way this is not possible, is if these lines are drawn as twin lines, in which case, they would be parallel.