Do you have bored kids who are constantly just itching to turn on the television? We've collated our top ten tried and tested TV-free activities to keep your kids active, interested and entertained (without needing a remote). Check them out.

Being stuck inside doesn't mean an adventure is off the cards. Set up this cute teepee indoors, throw your kids in, and you won't  hear a peep while little imaginations whirl away and games unfurl. My boys had their own private tent, smack bang in the middle of the living room. They didn't even remember what TV show they had been desperate to watch!

This one has all sorts of benefits including: gross motor skills, cooperation and sharing, cognitive development (as they tried to figure out how to make the whole thing work) and creativity (they insisted on making the ‘under the coffee table’ bit more difficult by putting cushions under there so the space was more squashy.)

I wasn’t entirely sure this would engage my kids but they loved it so much that I had to constantly tell them to hurry up so I could get footage of them actually bowling. They were so intent on creating a system of scoring and ‘bonus points’ they spent ages on the set up. Once the bowling started there was no stopping them.

Keep kids away from the remote with an old fashioned hands-on activity like string figures. String figures enhance cognitive developmental areas such as patterns and relations, geometry, spatial awareness and problem solving. Phew! It's also a great activity you can sit down and learn together. Check out five of the funnest string games out there, including how-to vids demonstrated by moi. 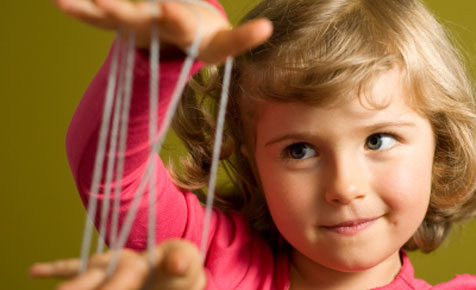 This is a great one for all that personal belonging development stuff. We used a photo of a birthday party from years ago and they spent some time recalling names of old kindy friends. The puzzle part of it is good for fine motor, mathematical thinking and cognitive skills. You can make the pieces smaller and smaller as they get better at it.

It’s always fun to use Teddy as a guinea pig for various inventions. After the flying fox, the kids moved on to a bungee jumping version from the top of the bunks, then one of them rigged up a very elaborate ‘knock down’ set up in the bedroom doorway. Slackajack the elephant became a cuddly-toy-wrecking-ball used to knock various things off the top of a toy box. See how many variations your kids can come up with.

Hand-eye coordination, fine motor skills and concentration are all benefits of a French knitting machine. So what to do if you don't have one? Make one, of course. The boys were not only fascinated by how to use a toilet roll to learn to knit, they even got into decorating their newfound toy.  And if they keep going with knitting I'll have a winter scarf in no time!

The TV's been turned off, so watching an episode of SpongeBob SquarePants is O.U.T. But you can appease little fans by teaching them how to SpongeBob. This dance is worldwide craze that's got big and little kids dancing themselves silly. And for extra brownie points have a go yourself. Turns out, I’m quite the SpongeBobber myself.

Get them into origami

Distract from the call of the television with a little creativity. Did you know origami is one of the biggest trends on YouTube? So what better way to occupy short attention spans? It boosts mathematical thinking, confidence building, and is cheap as chips to do. Check out six very cool origami and papercraft for kids (complete with expertly demonstrated video tutorials by my own kids).

Admittedly this was elaborate and involved some preparation. But once the footprints were made the kids moved on to creating their own trails through the house for each other.  Some involved footprints up walls, which was an important ‘learning’ activity that taught them that people can’t actually walk up walls.