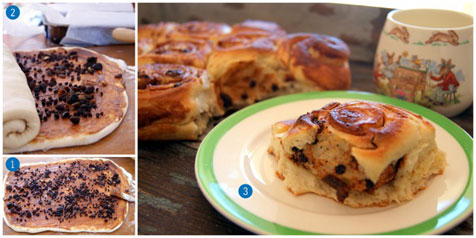 Line a 33x20cm baking tray with baking paper, letting the paper hang over all sides.

To make the dough, combine the flour, sugar, salt and yeast in a large bowl.

In a small bowl or jug, whisk the melted butter, milk and eggs to combine.

Add the egg mixture to the flour mixture and stir to combine.

Knead the dough for 8 minutes using the dough hook attachment on a standing mixture.

Form the dough into a ball, place it in an oiled bowl and cover with a clean tea towel. Leave the dough to rise in a draught-free place for 30 minutes.

Take a third of the dough and, using your fingers, press it into and across the prepared baking tray.

On a floured work surface use a lightly floured rolling pin to roll out the remaining dough to a large rectangle about 5mm thick.

Combine the melted butter, sugar and cinnamon in a small bowl. Using a pastry brush spread the cinnamon mixture over the dough rectangle. Sprinkle with the currants and gently roll the dough into a giant sausage.

Cut the dough sausage into 3cm-thick slices. Place the dough rounds swirly-side up on the dough base in the tray. They will swell and rise upon the second proving so don’t worry if there are gaps.

Brush the dough rounds with the egg glaze and set aside for another 30 minutes to prove again.

Bake for 20 minutes, until the scrolls are golden-brown.